EMI is emitted radiation and its effects – a phenomenon. EMC is a device’s ability to limit the levels of unintentionally emitted EMI (that can harm other devices) and also a device’s ability to operate normally when subjected to EMI. Therefore, EMC testing seeks to ensure that a product possesses the characteristic of Electromagnetic Compatibility (EMC): the ability to limit creation of EMI (Electromagnetic interference) and the ability to operate properly when subjected to EMI. Stated differently, EMC testing measures the level of EMI control found in a device, and therefore helps to ensure that unwanted effects are prevented. 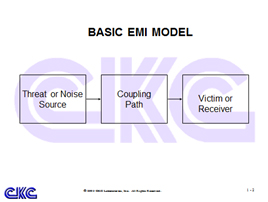 This diagram explains the elements of an EMI problem.

Click on one of the following links to learn more about CKC’s specific EMC Testing capabilities.